For any commercial aerial photography in the UK you are required to meet strict guidelines and have the relevant experience and insurance. Paul Losse of Salix Ecology has:

We use drones to create high resolution site maps, helping to accurately map out habitats. Drone images produce a much higher resolution than aerial photographs such as Google Earth images. For example the resolution of a drone aerial image is typically in the region of 2cm/pixel compared to 1m /pixel for a typical aerial image. Drone images are also up to date whereas commercially available aerial images are often several years old. This means that we can monitor fine-scale changes in habitat distribution over time, for example. 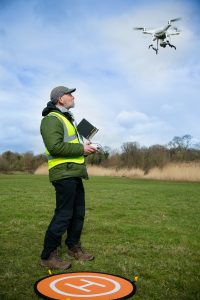